So it's been awhile since I've written a new post, but I've been quite busy in the meantime, such as photographing The Red Bull Cliff Diving World Series' stop in Boston, their only stop in North America.

I was very excited to be photographing this event, as since I saw it last year just as a spectator I was amazed by these athletes and this competition.

I got off the train at South Station, with a thousand thoughts running through my head of different situations and how to handle them and what my plan of attack would be. Before I knew it, I'm almost there, just another block or so. So first thing's first, find the media center and get my credentials.

After wandering a little bit, I find the trailer and meet with one of the Red Bull team, give him my name and he finds me on the list. I fill out a little paperwork, he gives me my bracelet, a media map and tells me to let them know if I have any trouble with access anywhere. Awesome.

I first scope out all the views and get a lay of the land so I know my options for shooting. I chose to start off inside the ICA Founder's Gallery, the large glass section right below the diving platform. This is where I'd start while they perform their warm up dives. 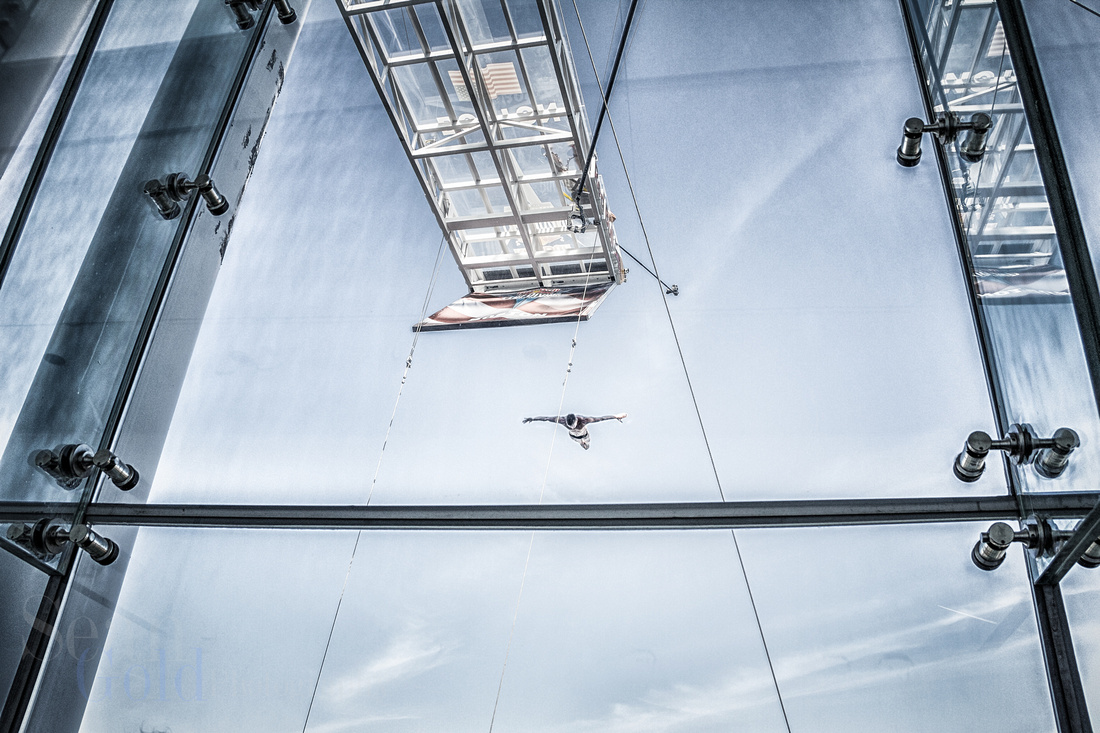 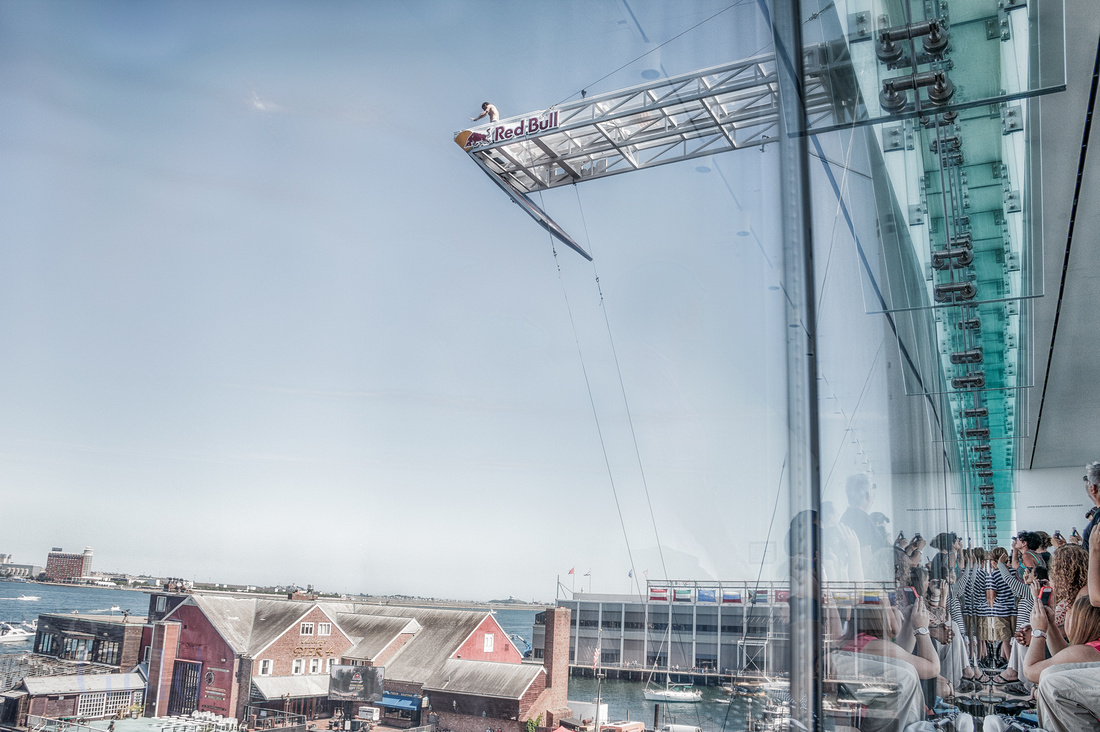 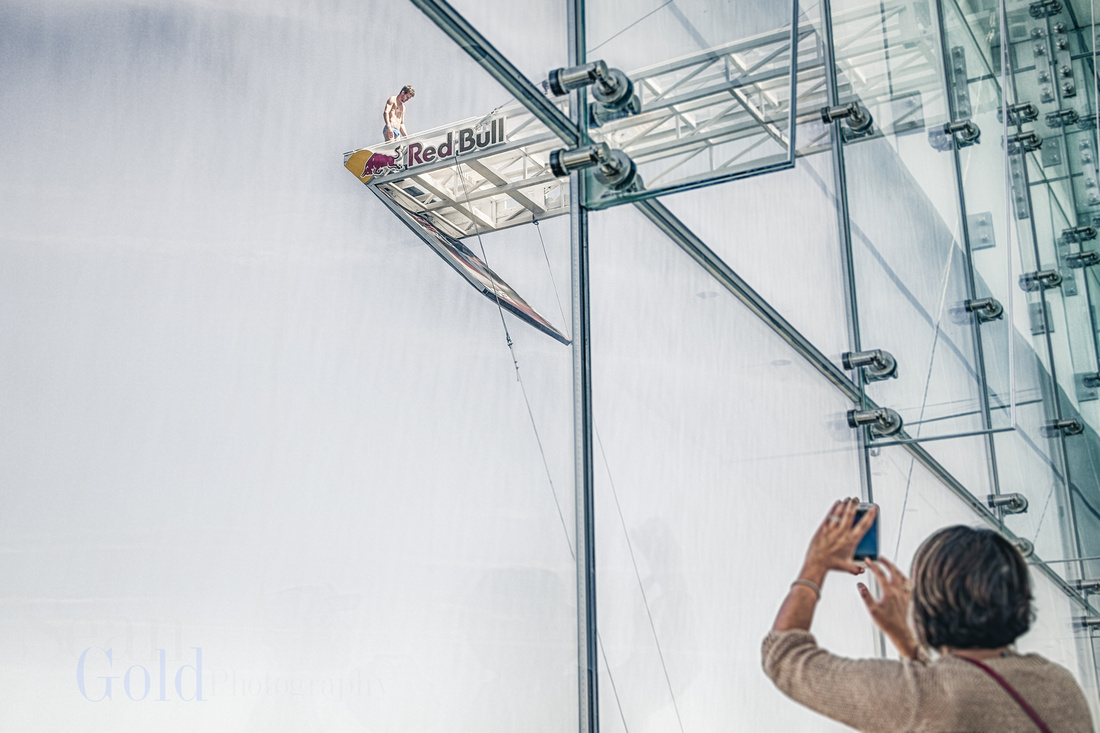 After I got my shots in there it was a race to get back outside for a new vantage point. I headed over to the "Splash Zone" by Anthony's Pier 4 to get some shots with the divers against the Boston skyline. 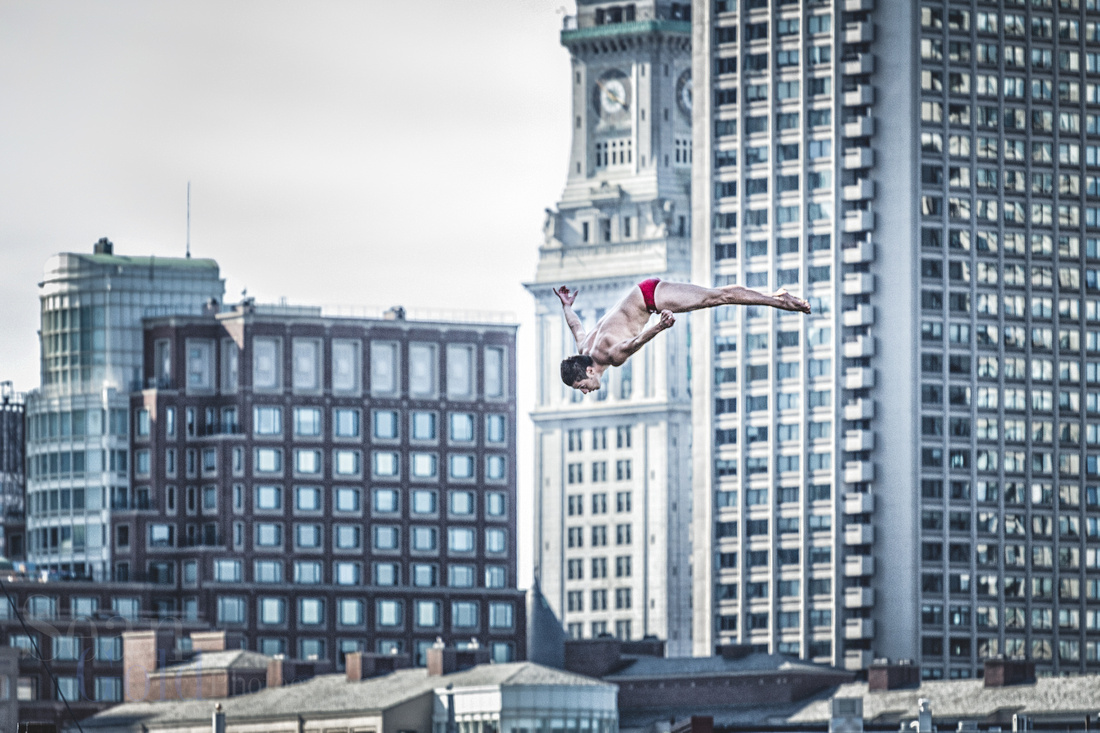 Now I'm not going to post all my photos of everyone of course, this is more like a Top....well Top "how ever many photos I end up posting" of the event :)

From here I wandered around looking for interesting shots then I found the Media Pier. I approached them and was told I couldn't go out there without an escort, so I went back to the Media Center and got a member of the team; Mike. We went back over, showed my ID, wristband and signed a waiver and I'm on my way out onto the media pier.

I only got a few shots off before I was approached by another Red Bull Team member who asked me if I had been out on the Media Boat yet, and if I would like to go right now, and indeed I would. So I hopped down into the boat and we headed out to where they were landing in the harbor. Awesomeness. 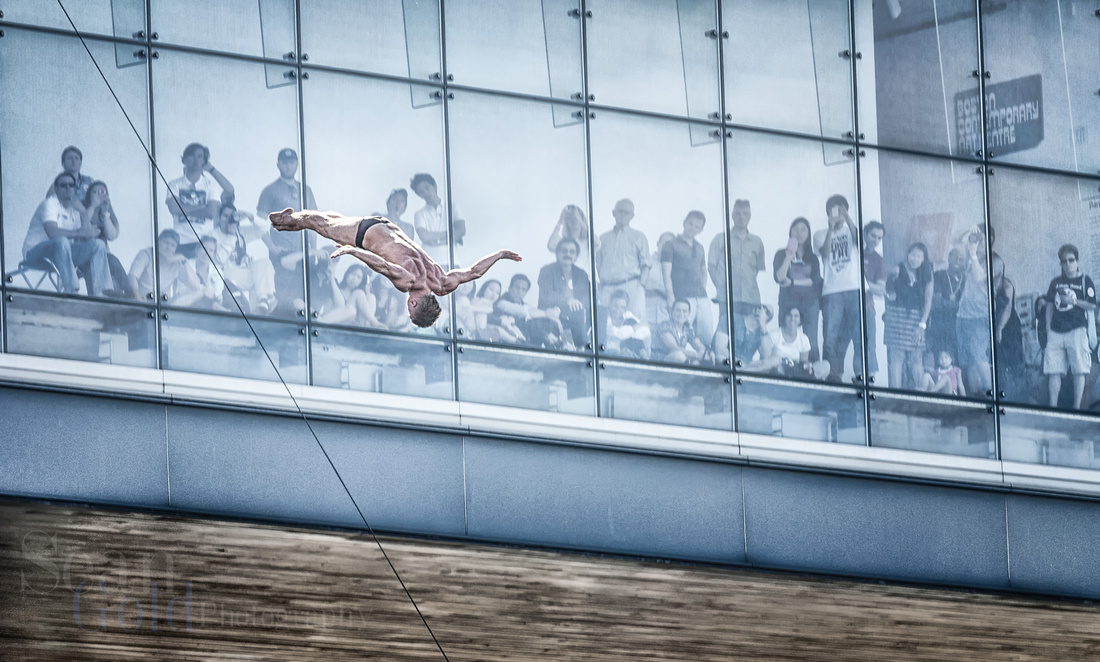 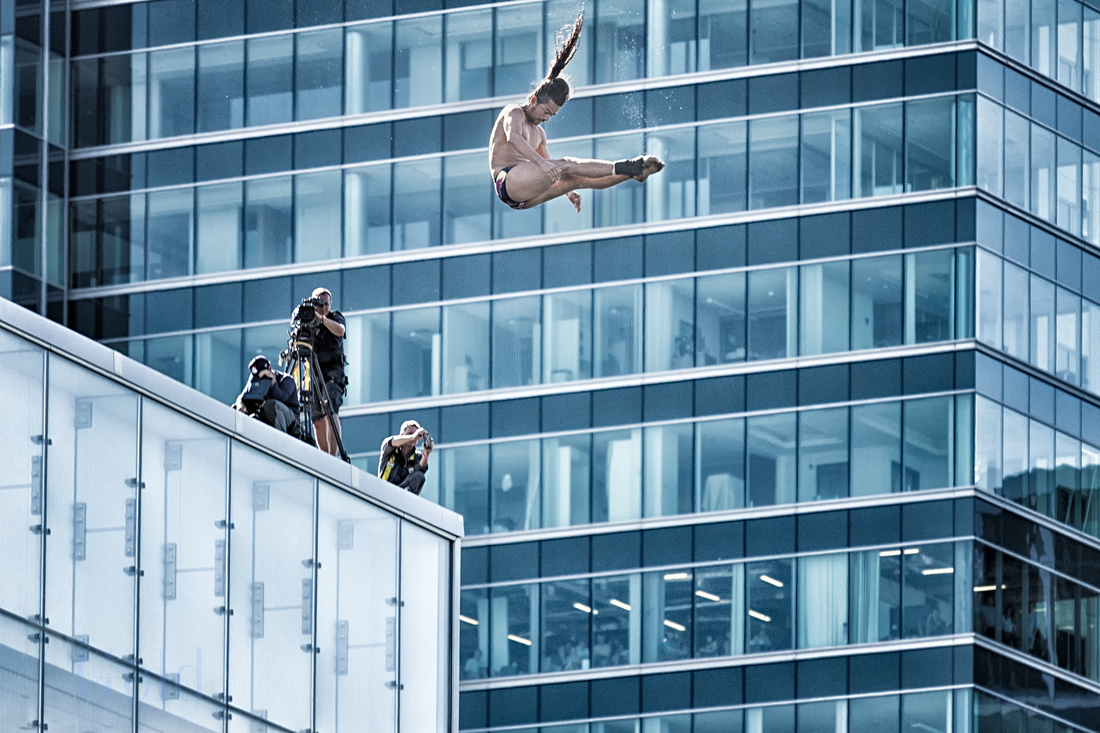 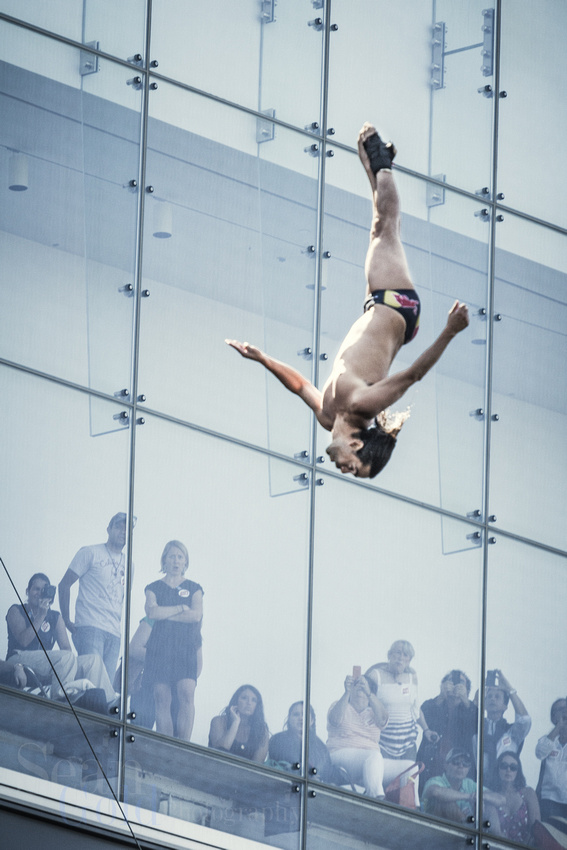 After I got off the Media Boat, I headed back to dry land to finish off my shooting for the day. The dives were done and now it was time to announce the winner of Boston, which was the amazing Colombian diver Orlando Duque (with the ponytail) !

All the divers were amazing, and are incredible athletes; I can't even fathom doing what they do. It's truly a spectacle to witness.

And as the last dive, Superman happened to stop by ! 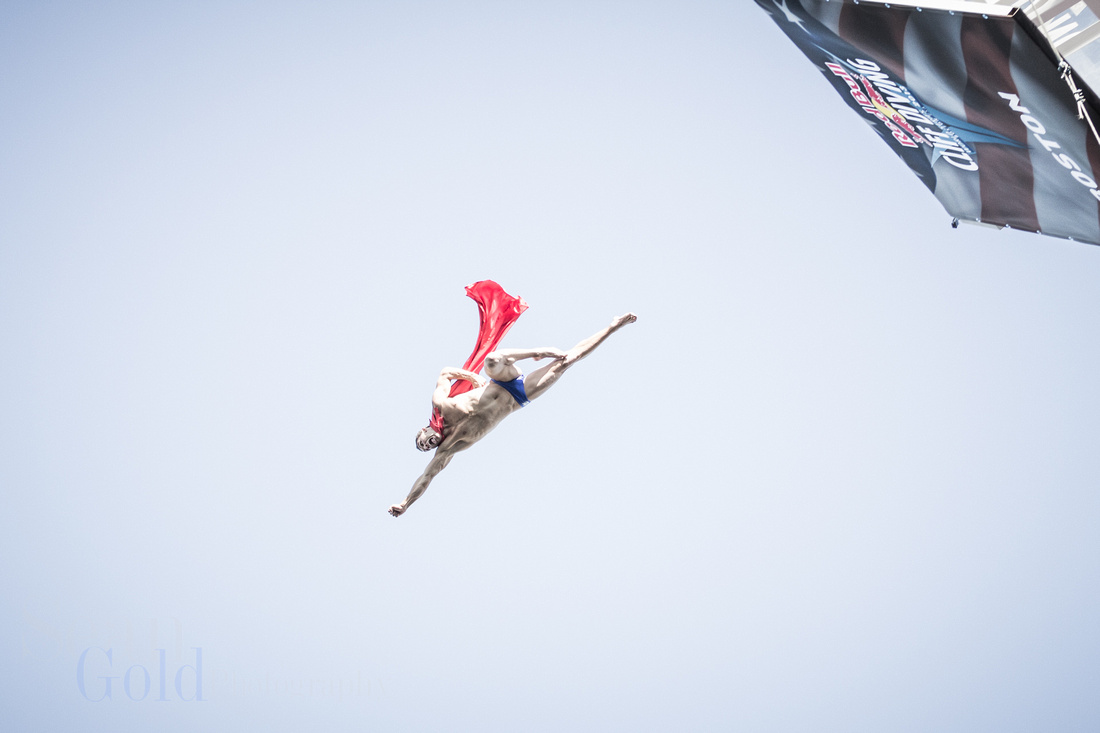 Then it was time to hand out the awards and the winners to have their "Champagne Toast" :) It was truly an amazing day and an amazing experience to be part of, not to mention all the free Red Bull :) I hope they come back next year and that I could be part of this amazing competition once again !